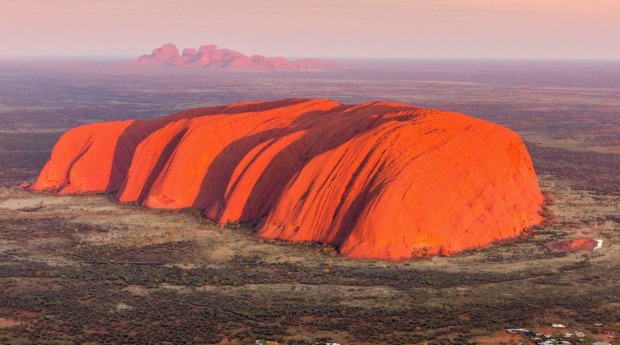 Every year more than 250,000 people come from all over the world to experience the natural and cultural wonders of Uluru and Kata Tjuta. The purpose of this newsletter is to provide lessons learned from a “white- fella environmental scientist” insight into impacts of tourists at sacred sites.

This unusual desert crustacean is Australia’s only known species of shield shrimp. The shield shrimp seen in a temporary waterhole in the Australian outback (IMAGE: Robert Pfeife). The Mutitjulu Waterhole is considered a perennial water source at Uluru.

Unique fauna such as the “shield shrimp” which occurs on top of Uluru originates from the ancient inland ocean when it covered the rock. Currently, Uluru is approximately 348 m above ground level. Bush tucker including bush tomatoes and plums occur around the waterholes (e.g. Mutitjulu) at Uluru.

The water quality and rainfall runoff is vulnerable to pollution from the waste/litter many tourist leave at the national park. The rain washes down and mobilises any waste left on the rock due to the steep and impervious rock slopes. Pollution can accumulate around the rock and become concentrated within the waterholes and landscape. The waterholes are important to sustain the local and flora and fauna.

The Mutitjulu Waterhole is one of the few places in the park where you may see wallabies among the tall grasses and river red gum trees. Surface water occurs in the region as water holes (tjukula), soaks (raalpa) and springs (kapi wala). Bush foods also abound, including tjantu (bush tomatoes), ili (figs) and arnguli (bush plums, as pictured above).

Aboriginal people know the value and importance of water in arid areas- their life depends on it. Water is not just a resource to the aborigine, it is also part of their culture. Water is used very carefully, as it is scarce in Central Australia. Uluru is a semi-arid area, with temperatures in summer reaching 47 degrees celsius. The average rainfall in Uluru is approximately 307 mm per year, however the annual evaporation rates (~2,800 mm per year) exceed rainfall by almost ten times.

The Mutitjulu water hole at the base of Uluru is regarded as the only perennial water source. Most of the water in the region is situated below ground and not visible. Groundwater is the only reliable water supply in the region and occurs within ancient aquifers (Dune Plains Aquifer and Southern Aquifer). The water supply in the resorts is mainly pumped and treated from the ancient groundwater system.

The visitors who choose to climb Uluru or walk around the rock will notice the dry and relatively flat landscape. However, when it does rain any waste/litter can pollute the water which has an impact on the local fauna, such as the shield shrimp.

Waste/litter can be in the form of water bottles, tissues, phone/camera batteries, cigarette butts, food scraps, chewing gum, medicines, and cosmetics. These items have an adverse impact on water quality and the ecology.

PREVENTING POLLUTION IS EASIER THAN CLEAN-UP

WHAT CAN WE DO

We can all take part in keeping the environment clean by preventing or minimising waste generation, by not littering, and by pick-up of any loose litter. It is very important to minimise the waste created at Uluru and to correctly dispose of waste so we can all help to keep the sacred areas clean and clear.

Be careful with the Precious Water – it is a scarce resource in central Australia.

TAKE ONLY MEMORIES AND