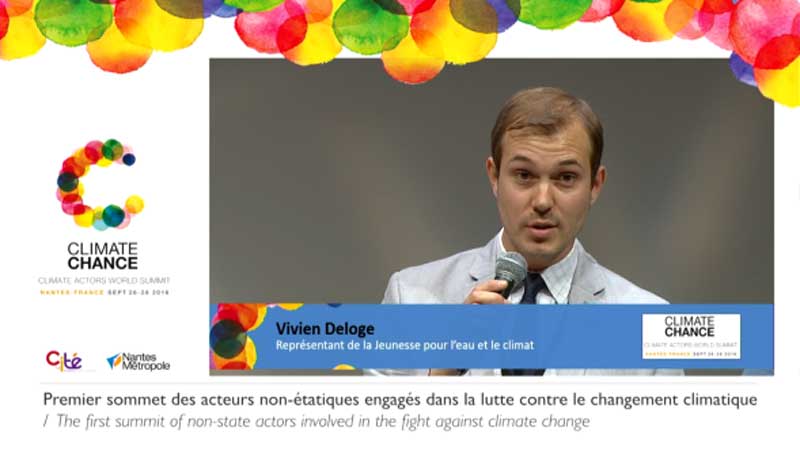 Youth representatives were at the Climate Chance Summit, held in Nantes, France, on 26-28 September 2016. Vivien Deloge, a member of the World Youth Parliament for Water (WYPW), wrote down his thoughts on the event in a guest blog for GWP. He says that youth can move mountains with very limited means.

In Nantes, 20 young professionals and students showcased the recommendations they officially presented at the COY11 and COP21 last year. Gathered in a White Paper entitled “Un Paris pour l’Eau”, they focus on 4 thematic areas: agriculture, health, water sharing, and climate risks. These recommendations are stemming from national consultations conducted on water, climate and the role of youth in 17 Francophonie countries. Finalised in Paris, they were officially handed to French Ministers Mrs Ségolène Royal, Minister of the Environment and Mrs Annick Girardin, then Minister for Development and Francophonie, by 52 young representatives at the COP21. This process was made possible with the support of the Office Franco-Québécois pour la Jeunesse (OFQJ) and Global Water Partnership (GWP).

For example, in the White Paper youth is calling for a moratorium on the use of chemicals in production process; for the development of water treatment techniques to eliminate these chemicals residues; and for education and awareness-raising action to help younger generations to protect their health preventively and not only curatively.

Waiting for these recommendations to be taken over by decision makers, we have started to implement them within our own youth organisations, such as the World Youth Parliament for Water and its national chapters. For instance, do-it-yourself workshops were organised in France to show young people how to create chemical-free cosmetics having no impact on water quality. Youth-led reforestation actions are also taking place in Brazil, Togo and Burkina Faso, while youth and media awareness-raising was organised in Togo on water, poverty and climate change.

So what is the key intake from this? Well, youth can move mountains with very limited means! And young professionals can actively participate in decision-making process – in line with the philosophy of sustainable development – by making meaningful recommendations reflecting their concerns and priorities. However, in the Nantes Declaration (adopted at the end of the Climate Chance summit), the only reference to youth was made through education, awareness-raising and capacity building. With the support of GWP and OFQJ, we decided to convince the organisers to officially acknowledge in the Declaration the role we have to play in decision-making process. We conducted side negotiations to emphasise the need for the organisers to recognise the active role of youth, and we raised attention on social networks, calling for not letting youth behind.

Thanks to the amazing help of GWP and OFQJ, we were so successful that two of us were invited to be on stage during the whole session of the Closing Plenary! I was lucky enough to be one of the two selected, and I decided to take this opportunity to shake classical thinking and speeches up and publicly call for an addendum to the Declaration stating that involving us in decision-making is the way to ensuring transition. The organisers readily reacted and replied that they could not amend the Declaration by themselves. However, since all the signatories were in the room, he offered them to accept this addendum by acclamation. What came next? A tremendous round of applause!

I was thrilled to witness our success and to receive so many expressions of gratitude and congratulations after the plenary, which highlighted the need for youth inclusion and intergenerational cooperation to ensure a sustainable future for all. I am highly looking forward to the next developments at the Youth Forum of the Budapest Water Summit and at the COP22, to keep the momentum and highlight the meaningful role we have to play in tackling water and climate issues! #FutureIsNow